To start using UppCad, we'll show you how to open a sample project and to navigate inside the basic commands and tools.
Let's start UppCad and look at its main screen: 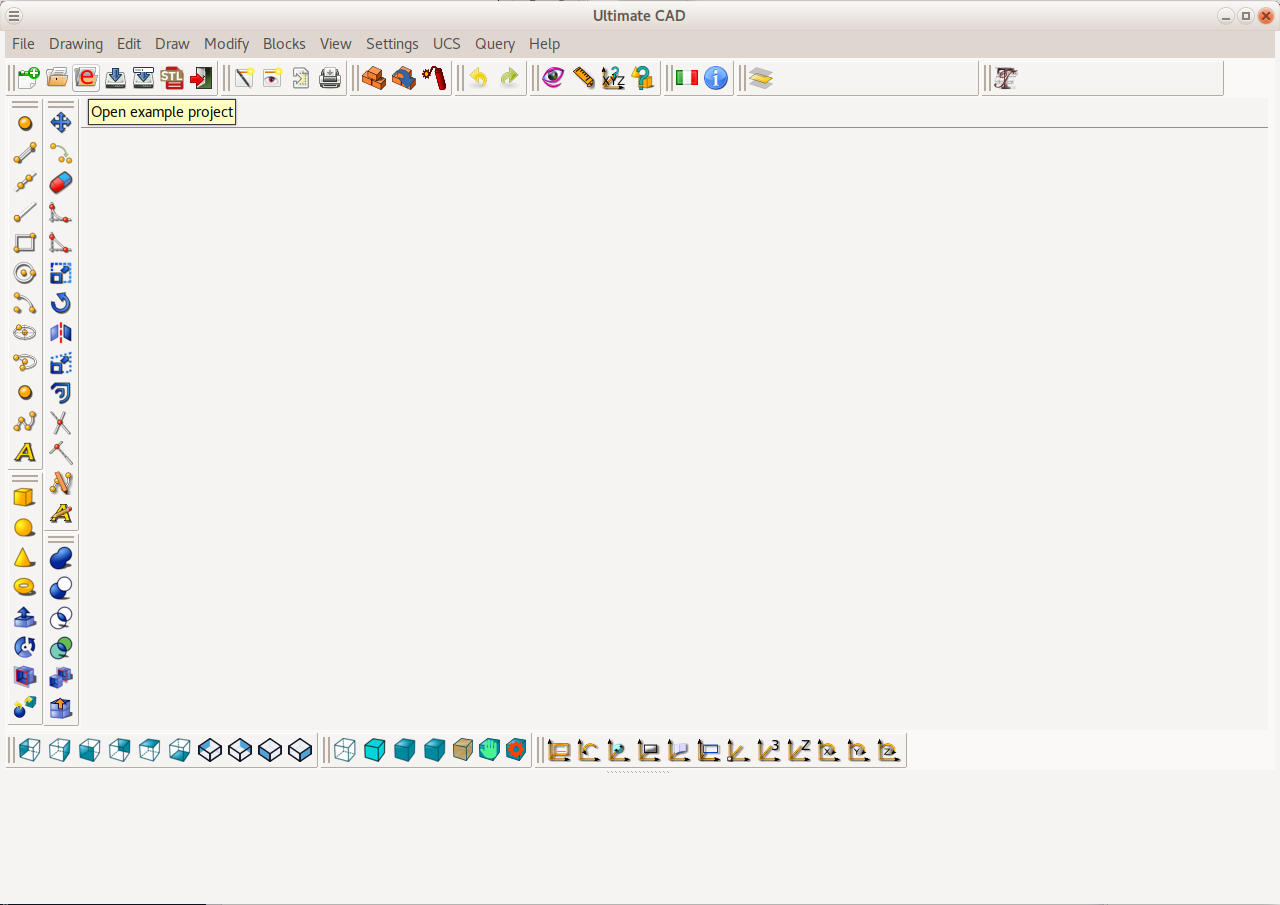 We can see the

button on upper left corner; it's the "Open Example" button. Pressing it we can select one example from builtins projects. Let's choose  the 3d.ucd : 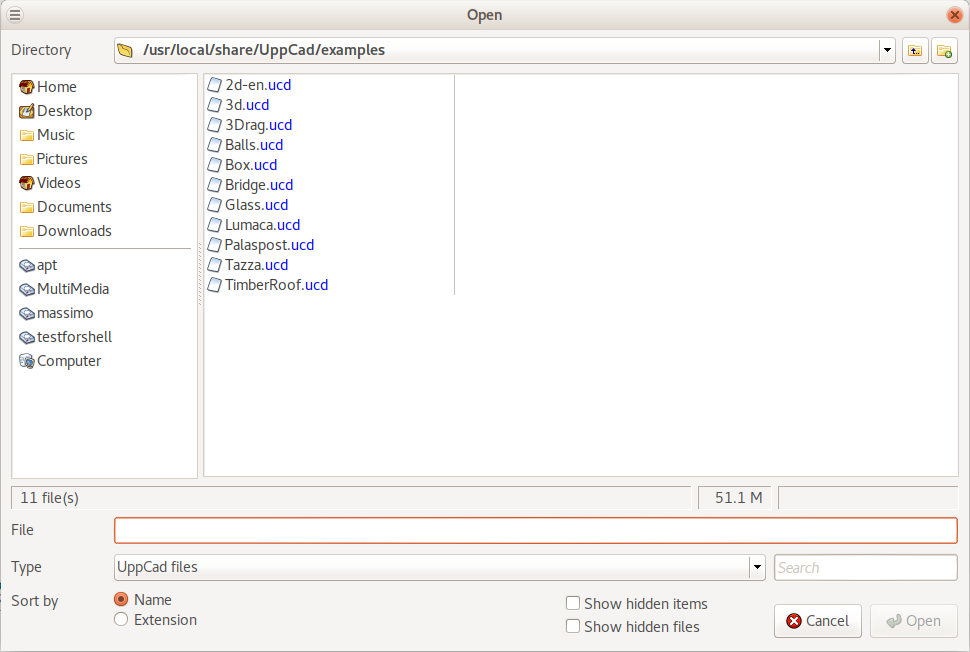 The selected project will open; we can see it on following screenshot : 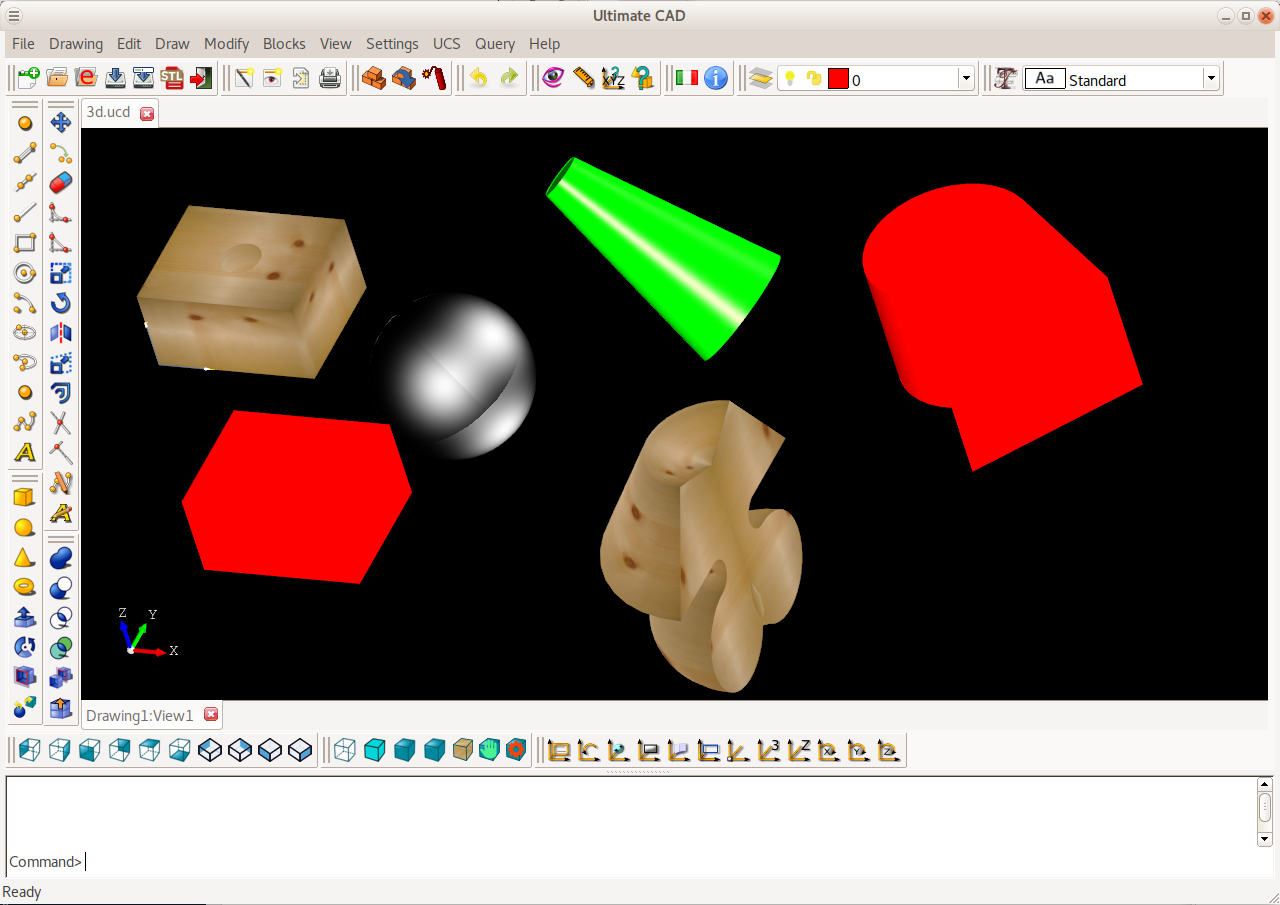 Let's see some important parts of our screen. 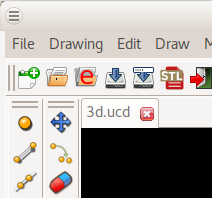 At this moment there's just one tab, named 3d.ucd, because we have just one opened project.
In UppCad you can open as many projects as you like, and swotch from one to another simply clicking on its tab in projects selector.
To close an opened project it's enough to click on small red cross. If the project has been modified since last save, you'll get a confirmation message asking if you want to save changes discard them or cancel the closing command.


On bottom left corner we can find the views/drawings selector: 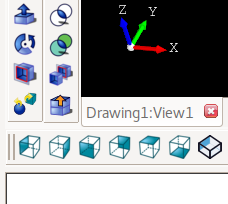 In UppCad every project can contain many drawings, and this is a big difference from most other available cad applications. This choice has been made to allow easy grouping of related drawings, making it east to deploy and achive them.
In a next version the project's drawing will be able to be interconnected, so when one of them is modified the others follow him. For example, it will be possible to have a 3d drawing connected with many 2d views.
By now all project's drawings have fixed names (Drawing1, Drawing2...); in short we'll add the ability to rename them.
As you can see from the above picture, each visible windows corresponds to a Drawing and a View.
Views are different looks at the same drawing. You can open an unlimited set of views for same drawing, each of them with different visualization parameters, as we'll see later.
Clicking on selector's tabs you can switch from one Drawing/View to another.
Last but not least, to close a drawing it's enough to click an the small red cross; differently from projects selector, closing a view we don't close any file, but just a view over it. The project stays opened and we can re-open other views over its drawings.


To open a new view on current drawing we have 2 choices; the first, easier, is to use a button from drawings toolbar :

button (New View) you'll get a new view which is identical to current one. If there's no current view opened, you'll get a view with some default parameters.
We'll see later on this document how to change the views parameters.

As an alternative, you can use the dropdown menu: 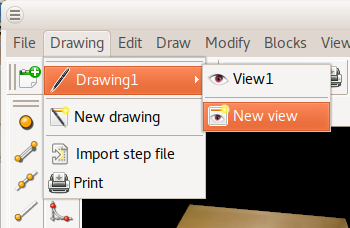 As you can see, almost all commands are available both in the dropdown menu and as toolbars items.
From here we'll use one or the other, letting to the user che task to test the other alternative.
Usually dropdown menus offer more choices, at the expense of more clicks to get the same result. For example, in dropdown views menu you can open a view over a drawing which is not the current one.

Add a drawing to current project


As told before on this document, an UppCad project can contain an unlimited number of drawings.
When you create a new project, its first, empty drawing gets also created automatically; you can add more drawings later.
A warning : by now you CAN'T remove a drawing from a project, so once you create it you'll have to keep in inside your project forever. In short we'll add the ability to remove a drawing from a project.
To add a new drawing to current project it's enough to press the

button (new drawing); the new, empty drawing will be created along as a view over it.

As in all CAD applications, also in UppCad the views are not static but can be modified both in geometry and in object's aspects.
Let's start with the geometry, with the ability to pan our view, zoom it and change the viewpoint.

To zoom just use the mouse wheel. The zoom is applied around the cursor and not, as in some other CAD, around screen's center. Our choice is, in our opinion, the most practical : if we want to zoom over an object we move the mouse over it, looking at it and rotate the wheel. The zoom happena around our point of view and the image's point under the cursor doesn't move. On other systems when you zoom the screen's center doesn't move, but the image shifts under mouse's cursor, which is quite annoying.
You can test the zoom behaviour with the opened sample drawing.

To pan the view over the drawing just press the middle mouse button (usually the mouse wheel) and drag the mouse around.

Here things becomes more interesting and less immediate to understand. View rotation is done by aid of a sort of 3d orbit, which is an immaginary sphere placed in the middle of the view. In UppCad the sphere is NOT visible, but its usage is quite simple.
To activate view rotation you must press and keep pressed both CONTROL and SHIFT buttons press the middle mouse button (as in pan command) and move around.
To explain in detail how do the 3d orbit work is complicated, so we'll use a short video to do it.
To test it just remember to keep CONTROL + SHIFT keyboard buttons pressed during rotation:

To simplify the usage we've setup some predefined views, which you can access with following toolbar :

UppCad supports many shade models to display the objects; from wire view up to shaded view with applied textures that can emulate, for example, wood defects, non smooth concrete and so on.
At this point we'll not go too much in depth over the shade modes, as we'll review them later when we'll see the Layers feature.
By now we want just to quickly show you the shade toolbar:

From left side we have : wireframe view, solid color shading, facetted shading (you can notice the facets on curved surfaces), phong shading, textured shading, user shading and user shade settinga, which will open a dialog to setup use shade modes.
You can see all the shade modes on example projects. For user shade settings, just open the corresponding dialog clicking last toolbar's button; you'll see the presets (as read only modes) and you'll be able to add more presets. Just play around with settings and press Ok button.
Once you've setup some user settings, the "hand" toolbar's button can be used to quickly restore current one.